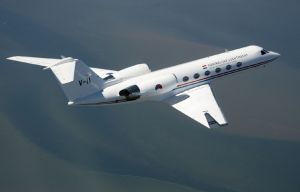 The Gulfstream IV is a twin-jet which is used mainly for private and business use. The aircraft was designed and built by Gulfstream Aerospace, a General Dynamics company based in Savannah, Geogia, United States from 1985 until 2003.

It was developed as a deriviate of the Gulfstream III. The wing was redesigned in order to save weigth and to improve the wing contour in order to decrease cruise drag and to increase range. The fuselage was stretched and the IV also has new engines.

The first GIV made its maiden flight on September 19, 1985. The model received type certification from the FAA in April 1987. The G-IV entered into service with serial number 1000 in 1987 and was upgraded to the special purpose GIV-SP (the version the KLu has) version at serial number 1214 in 1993. It was later redesignated G400 at serial number 1500

Where in the past the emphasis of the Royal Netherlands Air Force (KLu) was on protection and defense of the NATO-territory, it is nowadays on crisismanagement and humanitarian aid. That's why the transport of people and equipment through the air by the KLu has become ever more important. In recent years the KLu has flown to former Yugoslavia, Rwanda, Zaire, Uganda, Russia, England, etc.

The air-transport within the Klu is concentrated at Eindhoven AFB, where the 334 and 336 squadrons have their home base.

The Gulfstream IV has been in operational service since 1996 after the KLu bought it second-hand. The KLu uses it for transport of military and civil authorities. It is also used as a command aircraft, for inspections, coordination and liaison-flights. The gulfstream is adapted to military roles by extra equipment such as radio's and navigational equipment.